2019 has been a decisive year for the Muga Mine project which will bring employment, development and wealth to the region of Sangüesa and the Altas Cinco Villas. During this year, Geoalcali has achieved the following new milestones:

Geoalcali continues to work on obtaining the mining concession and other permits – municipal activity licenses, Ebro Hydrographic Confederation and power line – that allow construction work to begin as soon as possible. In addition to other works such as the definition of engineering or the continuation of research surveys. All this, under the vision of building a sustainable business around potash that is successful, profitable and respectful of the environment and our stakeholders.

Geoalcali stands out once again in the area of social responsibility 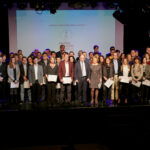