Coinciding with the celebration of World Bird Day, Geoalcali Foundation in collaboration with the naturalist organization SEO/BirdLife and Cederna Garalur, held a conference with the aim of spreading the need to protect the biodiversity of our habitat in general and, more particularly, the area in which the future installations of Mina Muga will be built, in the Sanguesa area, on the border between Navarra and Aragón.

From the hand of SEO experts, company workers and local leaders, such as the mayor of Liédena, Ricardo Murillo, or the mayor of the Rocaforte Council, María Eugenia Pérez Iriarte, toured the sites closest to the future industrial installations.

Once there, they listened the explanations of the technicians, they learned the characteristics of the different models of boxes destined to different types of birds, they placed some new ones and they checked and cleaned the nesting boxes for scops that workers of the company placed last year in a similar action.

The inspected area hosts, among other birds, owls, kestrels, scops and bats. Also for the latter a specially designed box was placed.

This action is in addition to those carried out by the Geoalcali Foundation in terms of sustainability and care for the environment as a non-profit institution aimed to the balanced and sustainable development of the regions in which the Geoalcali business projects will be installed.

Foro Lidera: Valuing Waste as a Resource, a Firm Commitment of the Mining I... 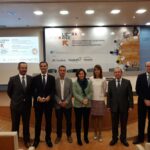 Geoalcali invited in the V National Aggregates Congress to take part at the...