Following the positive resolution issued by the Ministry of Ecological Transition, the company begins a new phase to materialize the project.

Geoalcali has been granted the positive Environmental Impact Statement (DIA) for the Muga Mine project. Issued by the Ministry of Ecological Transition (MITECO), this positive resolution means a determining impulse to advance in the materialization of the project.

The sponsoring company has expressed its satisfaction towards the given authorization. In this sense, Peter Albert, Managing Director and CEO of Geoalcali, has described the formulation of the Ministry as a ‘milestone for the company which implies a great opportunity for Navarra and Aragón as this project is a powerful engine for economic development and employment creation in both communities’.

From now on, the company begins a new phase directed to the development and execution of the Muga Mine, a project that has been underway since 2014. During this time, Geoalcali has been involved in a rigorous permitting process, studies and research, maintaining a strong social commitment and constant dialogue with national, regional and local entities as well as with the habitants of the area of operation. ‘We have developed several voluntary public information processes, in addition to those required by law, precisely to promote the participation and knowledge of society towards this project’, said Albert.

The MITECO report proves the environmental compatibility of the mine, conditioning its development to a series of preventative and corrective measures and to the execution of an Environmental Monitoring Plan, which ensures the maximum guarantees in its execution and minimizes possible impacts. These measures come from a rigorous and exhaustive process of analysis of the project, which has involved a wide variety of regional and state bodies, local entities, environmental groups, citizens and other stakeholders.

Geoalcali has reiterated its commitment regarding the development of the project from the utmost respect towards the environment, total transparency and rigour in public information, as it has been doing since its inception.

Muga Mine is a potash extraction mining project situated within the communities of Sangüesa and Javier (Navarra) and Undués de Lerda and Urriés (Aragón).

Developed by the Geoalcali Company, it is one of the main industrial engines of employment creation in both communities. It will provide a great socio-economic impact, contributing to set population in rural areas, creating more than 800 jobs and opening future opportunities for the habitants.

Potash is one of the three most important components in commercial soluble fertilizers. It is very effective in improving the performance of land which by its very nature does not have the ideal characteristics for staple crops.

1st School Contest on Health and Safety in the surroundings of the Muga Min... 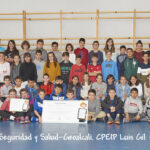 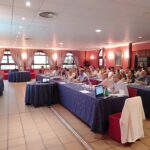 Geoalcali meets the Mayors from the Mina Muga area to inform about the favourable...