The prizewinners havebeen chosen through vote by the 39 entities that form part of the Association.This year there was a large turnout of 1,298 votes. Nine projects among the three categories were presented for this recognition.

The project ‘Transformation of the Liédena Municipal Dump into El mirador de la Súbita’ by the Geoalcali Foundation aimed to promote more sustainable cities. They contributed positively to the recovery of degraded soils, providing it, at the same time, with a tourist attraction; converting a dump and rubbish dump into a leisure area. It should be remembered that Geoalcali’s Environment Department also contributed to this initiative.

The other award-winning projects were:

The Merece la Pena project, called ‘Positive Attitude’, has the following objectives: to promote acceptance and coping with a painful situation by adopting a positive attitude.

The Varazdin Foundation’s project ‘Integrated Management System for Reusable Crockery’ seeks to reduce the ecological footprint resulting from the use of plastic in large events. From the Foundation they provide crockery and metal cutlery that themselves are responsible for delivering, collecting and cleaning. 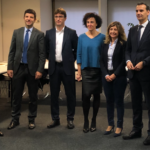 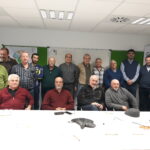