Dozens of people came out for the first day of the two organized by the mining company at its facilities in the Sangüesa region in order to obtain direct information about the project after obtaining the favorable Environmental Impact Permit granted by the Ministry of Ecological Transition.

Rocaforte Site – Sangüesa, 19 of September, 2019 – The mining company Geoalcali has celebrated this morning the opening of the II Open House Days for the Muga Mine project in the Exploratory Management building that the company has at the Rocaforte – Sangüesa Site.

Today, dozens of people were able to learn firsthand all the information about the potash extraction project. Among those present, mayors and corporations from all the areas concerned by the project, as well as students from various schools in the area.

Throughout the tour established inside the building itself, attendees have been able to learn about details of the project’s current status, its economic, social and environmental repercussions, the work being done by the Foundation and the team of people working at the company to advance it.

As it has been shown both in the audiovisual projections and the information panels, after obtaining the favorable Environmental Impact Declaration granted by the Ministry of Ecological Transition (MITECO), Muga Mine now faces a new phase aimed at completing the rest of the permits necessary with the endorsement of being recognized by the competent public administration as a solvent and sustainable project socially, economically and environmentally.

Muga Mine is located between Navarre and Aragon, within the municipalities of Undués de Lerda and Urriés, (Aragón), Sangüesa and Javier (Navarra). The extraction zone will have two mine entrances located in Aragonese territory, in Undués de Lerda. The Treatment Plant will be built in Navarra, near Sangüesa. It is estimated that, in full production, the Muga Mine will create around 800 direct jobs.

Geoalcali is a Spanish company dedicated to the development and exploitation of potash mining. At present, it is made up of 40 people from different professional branches who have the will to develop a unique project, committed to their environment and that can serve as an example for sustainable mining development.

This initiative joins other informative actions – talks, presentations, mailings, meetings, etc. – undertaken by the company and addressed to all interested parties.

The Open House Days dedicated to Muga Mine is part of the commemoration of the European Minerals Days. Held every two years, this time the main theme is the contribution of the mining sector to local economic development.

The Environmental Education Museum of Pamplona hosts the “Essential Minerals... 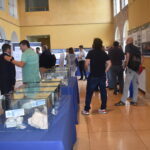 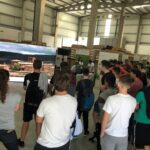