More than fifty professionals attended the First Conference on the Use of Resources and Circular Economy organized by the Foro LideraRSE organized by the Diario de Navarra Foundation in collaboration with Forética.

The headquarters of the Confederation of Employers of Navarra, hosted this meeting that contained presentations by experts such as Maria Mendiluce, Director of the World Business Council for Sustainable Development (WBCSD), or Carlos León Perfecto (Sustainn), consultant specialist in circular economy.

The waste management and its use as valuable resources for companies led the round table on Circular Economy and Navarra Mining  with which the meeting was closed and in which Geoalcali was present through its Head of Institutional Relations, Ricardo Pérez Merino.

In his speech, Pérez Merino highlighted Geoalcali’s commitment to sustainability and its commitment to developing a reference project on this matter. He cited the example of waste valorisation through the sales strategy of the byproduct-salt and the commitment to convert Mina Muga into ‘the first mine with zero waste at the end of its useful life’.

The Foro LideraRSE is an initiative promoted by the Diario de Navarra Foundation and La Información Group with the aim of promoting a debate for the promotion of social responsibility of the companies and organizations of the Autonomous Community of Navarra.

Geoalcali in the IV Meeting of the Navarra Mining 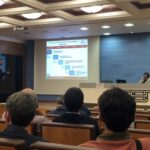 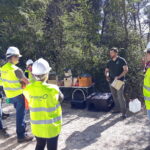